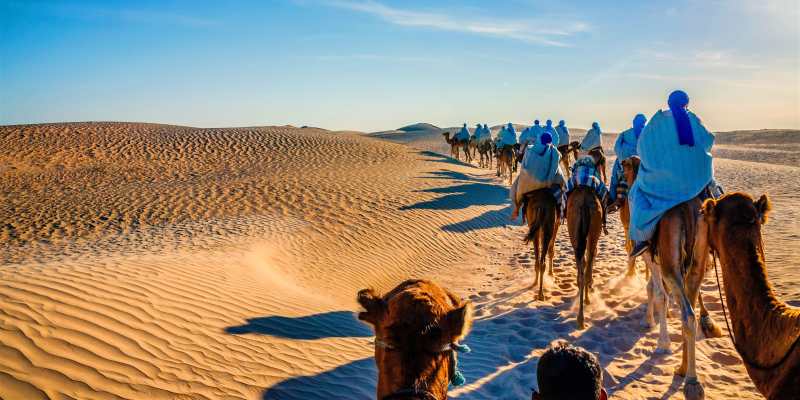 Tunisian people speak what is called Tunisian Arabic, a type of Arabic that is used by over eleven million people. Tunisia people call it Derja, meaning dialect. Derja is used all over Tunisia into parts of Algeria and Libya. Tunisian Arabic is a spoken kind of Arabic. Berber is spoken in a few small villages in southern Tunisia.

While Arabic is the “mother language,” the multi-lingual use of language does point to Tunisia as a highly visited country by the Europeans.

French is spoken in all matters relating to money or business and is posted on shop signs, menus, hotel and tourist information as well as Standard Arabic. Over fifty percent of Tunisia is also literate in French.

In major cities, English, Italian and German are also spoken and Italian is still highly considered a language of commerce.

In school, the French language is offered and taught to the children at age eight. Additional studies in secondary schools are also offered in French. English is now a mandatory subject at school and is taught to children from the age of ten onward.

Standard Arabic can be understood throughout most of Tunisia and most Tunisian’s can speak some Standard. Tunisians consider Tunisian Arabic as a type of Classical Arabic. The difference between Tunisian and Standard Arabic is the use of many words from other influences such as Spanish, French and Italian, as well as Turkish, Berber and Punic.

Derja, which is written in Latin form, is now being used on websites such as facebook. Billboards also are in Tunisia, although the name of the company is not included. Tunisian Arabic is mainly spoken.